Some websites only present one side of the story. That's where we help out...
← Top 2015 Op-Ed on Christian Post
Lack of Diversity in Academic Circles →

But the reality is, in a community, different people want different things. And sometimes, what one person wants, will impinge upon what someone else doesnt want. Some people deny this reality, with vacuous advice such as

Which sounds kinda meaningful, until it’s your only grandchild that’s being aborted, or it’s your business that is held up by someone else with a gun, and you realise that what others do, still affects you.

And so it is with the issue of homosexuality. When debating whether gay marriage should be legal, many a gay activist was heard to claim that new forms of marriage have no bearing on normal marriages. But scratch deep enough, and you find that even gay people have said that’s not true. Gay people are actually often unwilling to accommodate those who believe homosexual practise is sinful, EG, EG2, EG3, EG4 sometimes litigating against churches, to force their way. 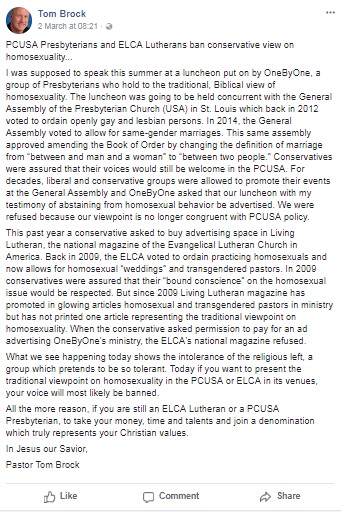 And calls for censorship of traditional perspectives on the topic – 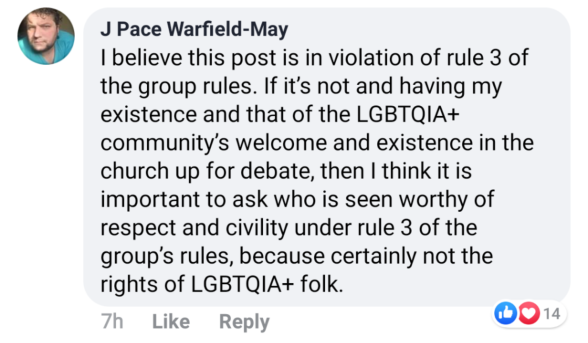 The answer is no. It’s not possible to please all. If you have been around for a few decades, you might remember the days gone by when gay activists endlessly called for “tolerance”. But few these days are satisfied with tolerance. As we can see above, RMN calls for “full inclusion”. Use of the word ‘full’ is very intentional. It intentionally means inclusion in every way. In the same way that the gay community refused to accept civil unions as an alternative to marriage, full inclusion means that GLBT people should not accept any alternative to being eligible to undertake any role in a Christian setting, that a straight person might undertake. And implicit within that is the notion that there is nothing sinful or unchristian about homosexuality.

So where does that leave the Christian who understands the Bible to say that a man should not lay sexually with another man (Leviticus 18) and that lusting after the same sex rather than the opposite sex, is unnatural and that homosexual sex is shameful (Romans 1)? Or echoing church fathers like John Wesley, saying that “I am a Bible bigot. I follow it in all things great and small” (John Wesley’s journal #XIV, June 2nd, 1766). Can that Christian debate that, or even raise the point, in a RMN setting? Probably not. Such discussion would be exclusionary and unwelcoming for homosexuals. Mere discussion of this would violate notions of “full inclusion” and would leave them feeling “unsafe”. And so you see that full inclusion of GLBT people, implies lack of inclusion of the full Gospel, and a silencing of certain points of view. People like the Pope or the Biblical St Paul, if he were around, would be silenced … at best. Methodism’s founder, John Wesley, would be thoroughly persona non grata for his exclusionary practises.

1. The US Supreme Court holds records showing the RMN standing against religious freedom.

2. An article on Slate relates the perspective of a UMC attendee named Barclay, stating –

Barclay can’t ascribe to a form of unity that means “that I can sit next to somebody who thinks that I’m going to hell or that I have some psychological problem because I’m gay. They might be able to sit down and have a conversation with me and table that, but I can’t say that I can feel respected.”

Barclay feels unable to be in unity with someone who regards homosexuality as sinful.

3. In 2015, RMN co-sponsored a conference named Gather at the River. At that conference, traditional views on sexuality were reportedly labelled by one minister as being “dangerous”. That minister elaborated that “The Spirit is showing us what once was revered as ancient truth has become uncouth and untenable.” Yes, untenable and dangerous. Would views that are regarded as untenable and dangerous, get a fair hearing?

4. A lesbian UMC bishop has described her local traditional congregations as being not real UMC churches.

5. In September 2016, http://www.umc.org carried a report of a pastor who said that those with a traditional understanding in the debate, were feeling less welcome.

7. In early 2019 as the UMC were voting on whether to become more ‘inclusive’, a supporter of greater inclusion reportedly said about conservatives who might leave as a result; “I wouldn’t spend too much time worrying about them leaving,”. Huh? Doesn’t sound like an inclusive attitude does it. A bishop prayed that God should smite those who don’t vote for inclusivity (https://www.christiancentury.org/blog-post/guest-post/methodist-mess-st-louis). Others were even more exclusive –

Meanwhile others were saying that a policy that allows for both Progressive views and conservative views (the One Church Plan), was just an interim step –

There are similar stories in other denominations. Some Catholics who stand for the traditional and official position of the Catholic church on homosexuality, have even been told they are unwelcome at services that are run by liberal Catholics. And in protestant circles where ‘diversity’ is prioritized, traditional congregants have even reportedly been banned, books are being banned traditional teachings renounced (https://www.firstthings.com/article/2018/10/elca-hits-bottom) and in other cases their views have been known to be pushed into the background, eg at the ELCA –

And there have been similar complaints in the UK and Australia (https://www.theaustralian.com.au/nation/samesex-unions-divide-church/news-story/fd100312154ee4aaa3e7a5e035f3784e). One Bishop has been threatened with being deposed. The problem is captured with humor in this satire: http://babylonbee.com/news/pcusa-reaffirms-inclusive-stance-toward-everyone-exact-beliefs-pcusa/

In the secular world, GLBT “equality” increasingly requires that others go along with the flow. The GLBT flow, that is. Failure to do so often results in penalties, loss of employment, censorship and exclusion for those who disagree. There is little reason to think that “full inclusion” in the church, will mean anything different in the long term.

o Flaws in the Matthew Vines Video
o The Bible does Not Portray Jesus as Silent on Gay Marriage
o Christians Tired of Being Misrepresented, Are Misrepresenting
o Anti-bullying Leader Engages in Bullying Again
o Being a 'Progressive', isnt Necessarily about Progress
o So-called 'Gay' Penguins and the Complex Concept of Homosexuality
o 'Homophobia' is a Flawed Term
o Gay Suffering Is Not Entirely Due to Discrimination
o Same-sex Marriage Impacts Heterosexuals
o Top 10 Misunderstandings by Conservative Christians, about Homosexuality
o "But in ancient times they didnt understand homosexuality"
o "God And The Gay Christian: The Matthew Vines book"